Sit tight and enjoy the magical trip to Menchuka, a beautiful valley of Shi- Yomi district in Arunachal Pradesh. Situated at an elevation of 6,000 feet, the Menchuka valley will serenade you, mesmerize you and engrave poetic memories in your heart. Doesn’t make sense? Well, let’s take you to my journey. 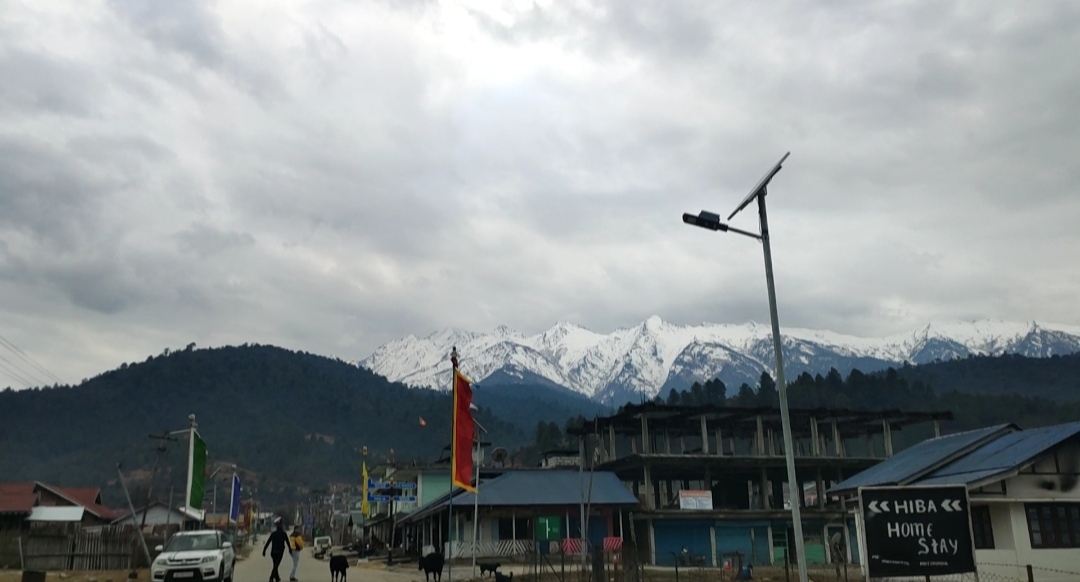 When it comes to setting up a trip itinerary in the Northeast as a tourist, you will only have a few options to consider based on your capabilities. However, as a Traveler, you will always be determined to push the boundaries of your imagination. Menchuka is an example of such a limit. An ultimate travel experience I ever thought of. We all know that only a few wanderlust people have the heart to find a home in strange places. Well, recently I tried to find my home in a small trip and the things I experienced along the journey was just unreal. I will try to share my feelings as much as I can but as said “True beauty lies only in the eyes of beholder”.

Before we start, let’s dig some knowledge about “The Magical Mechuka”.  Mechuka or Menchuka is around 200 km northwest of Along. With an elevation of about 6,000 feet, it is just 29 km away from Indo-China border (McMahon line). The valley is also known as the “The land of medicinal snow water”, where men refers to medicine, chu refers to water and kha refers to snow. With vast meadows and large valleys it is home to the Memba, Adi and Tagin tribe. Menchuka was used as a strategic location during the 1962 Indo- China war because of the bowl- shaped valleys. With no accessible roads, The Indian Air- force landing strip was the only way to Mechuka. Since the visit of Dalai Lama to the 400 years old Samten Yang chag Monastery in 2003, the valley became accessible by road too. 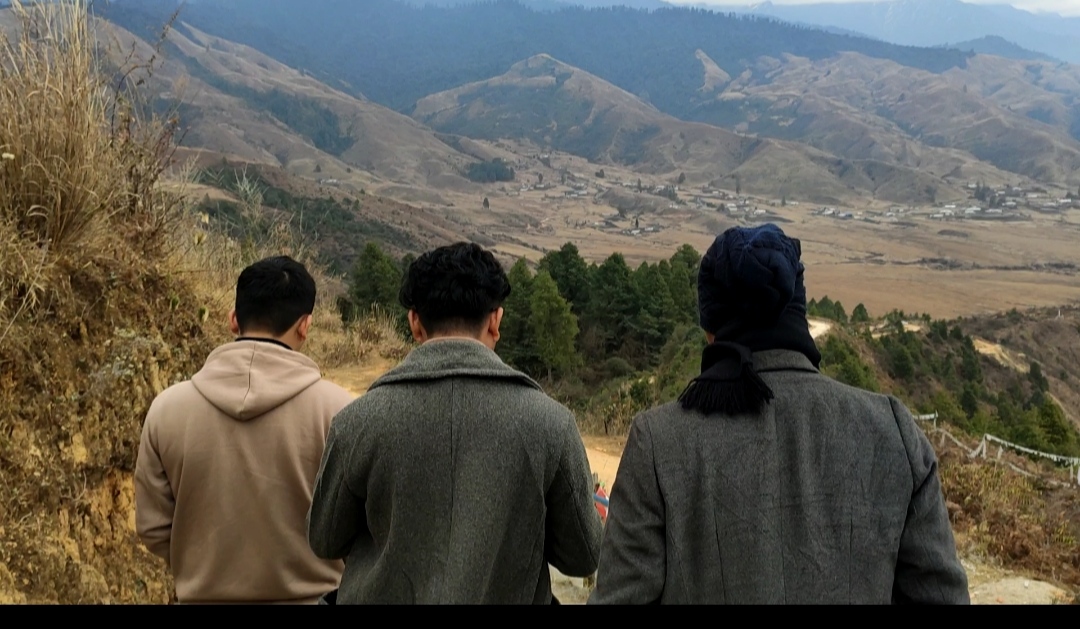 It all started over a cup of chai with a few buddies. We were frustrated, too, because the frantic pace of Covid-19 situations was already eating us. As a result, the only option we had was to find a nearby safe travel plan. We began sorting numerous locations, beginning in Shillong and concluding in Sikkim. And just as the idea was about to fall apart, one of my friends recommended Tawang. Initially, we settled on a strategy and decided to create a Tawang itinerary. However, as a traveler, I desired to visit a location with less tourists and more locals. I asked my Arunachali friends for recommendations, and one of them told me about the great Mechuka valley, which I had never heard of before. All we had to do now was finalize our plans, pack our belongings, and depart.

I have already published the travel routes in my previous blog; so I will only be narrating the objectives here. 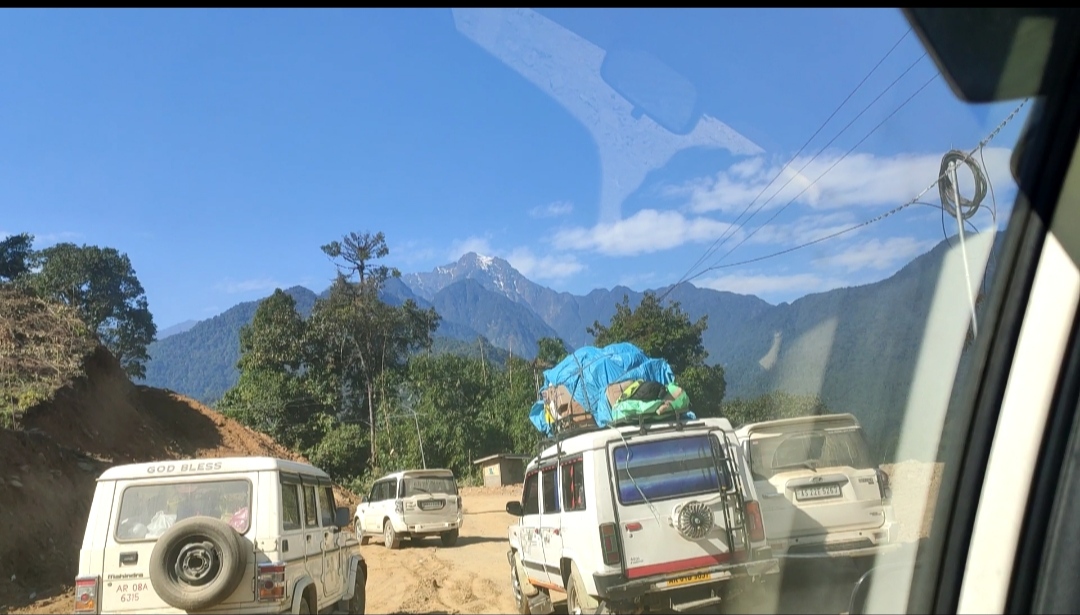 The voyage began on January 3rd, 2021. A group of five inexperienced travelers embarked on their new journey with no idea what to expect. Everything was in order, so we hired a cab and hoped the journey would go according to plan. However, as we all know, reality rarely meets expectations. We arrived in Menchuka on the third day, despite the thick and bumps. Since we couldn’t book our stay prior to the journey (Hard to book homestay in mechuka online) we had to physically search for hotels in mechuka. Frigid and fatigued we had our dinner and went to a sound sleep.

The, next morning (around 6 am), I heard someone shouting “guys come and see”. Still exhausted and chilled I was not ready to get out of bed yet, but my friend pulled me out of my blanket and pushed me to the balcony. The view, “Oh my God”! I cannot explain what I saw and experienced. It was just magical and unimaginable, there and then all my exhaustion ceased to exist.  After living in the moment for about an hour or so, we rushed to freshen up. The surface of water in our bucket was frozen, LOL! With a lot of struggles, somehow we managed to clean ourselves up with the freezing cold water. We followed the itinerary for the rest of the trip (had to add some plans accordingly). 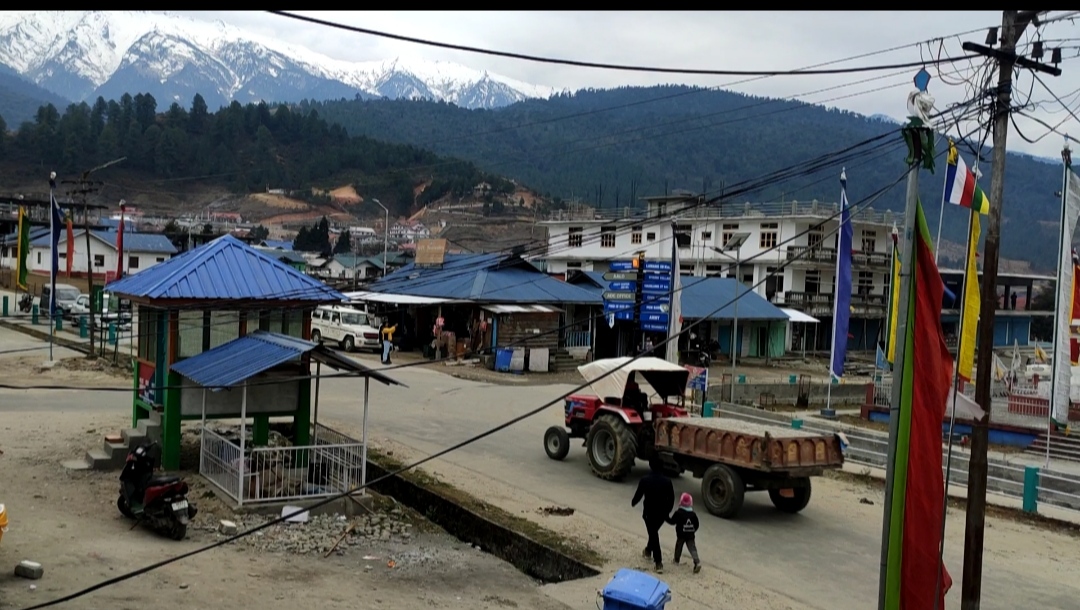 The bowl- shaped valley was covered with vast meadows and evergreen pine forests. The snow-capped mountain tops could be seen from literally everywhere. The view was not only beautiful, but also heavenly! There was something sacred and angelic within the air. I could clearly hear and feel the breeze carelessly whispering and singing harmony lessons.  Finally, I realized what it meant when someone said, “The ones who have suffered the most have the greatest hearts.”. Because, despite all of the wars, migrations, and eluded civilizations, the people of Mechuka are one of the friendliest local you’ll ever encounter.  Every person you speak with will have a different story to tell. So joyful and down to earth, they will make your journey a lot better. 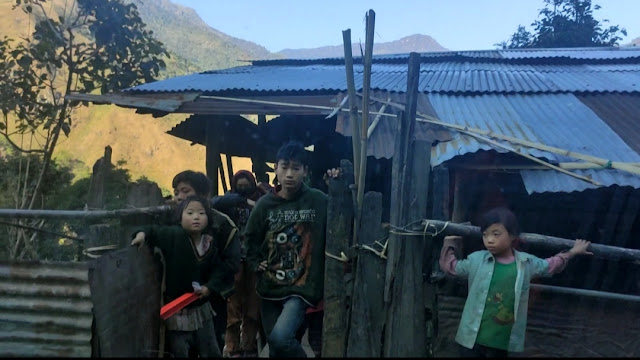 Every year during the month of November, the Union tourism ministry and state of tourism department organizes a 3-day adventurous festival in Menchuka. The festival involves with varieties of adventurous sports ranging from propelled glider and micro- light glider rides, aero- modeling, paragliding, trap shooting, mountain biking, river crossing, rappelling, river- rafting, trekking and rock climbing. The main moto of the festival is to promote tourism in the state.

Even with an extreme weather conditions, the snow- caps and the green pine forests in winters makes it the best time to visit. I would suggest seeing the weather forecast prior to visit. The weather may get a little harsh sometimes, but trust me nothing will keep you sick from enjoying the scenic beauty of menchuka.

Places to visit in Menchuka:

The valley of mechuka is less of a tourist’s place and more of a traveler’s spot. Now, you might think why would I say that? Well as per my knowledge I would explain a tourist as someone who would visit a place, take some memories from it and cherish it forever. Where in, a traveler in my perspective is someone who would travel around, live in the moment and would never return to the same place. Same, Mechuka is such a holy place where your one journey will be enough to feel and cherish it for your whole life. Now you might hear from others that if you visit Mechuka you would want to come back again and again. But trust me; you will never hear the same winds again and again. But not to convey, it entirely depends on you. My experience says it otherwise. 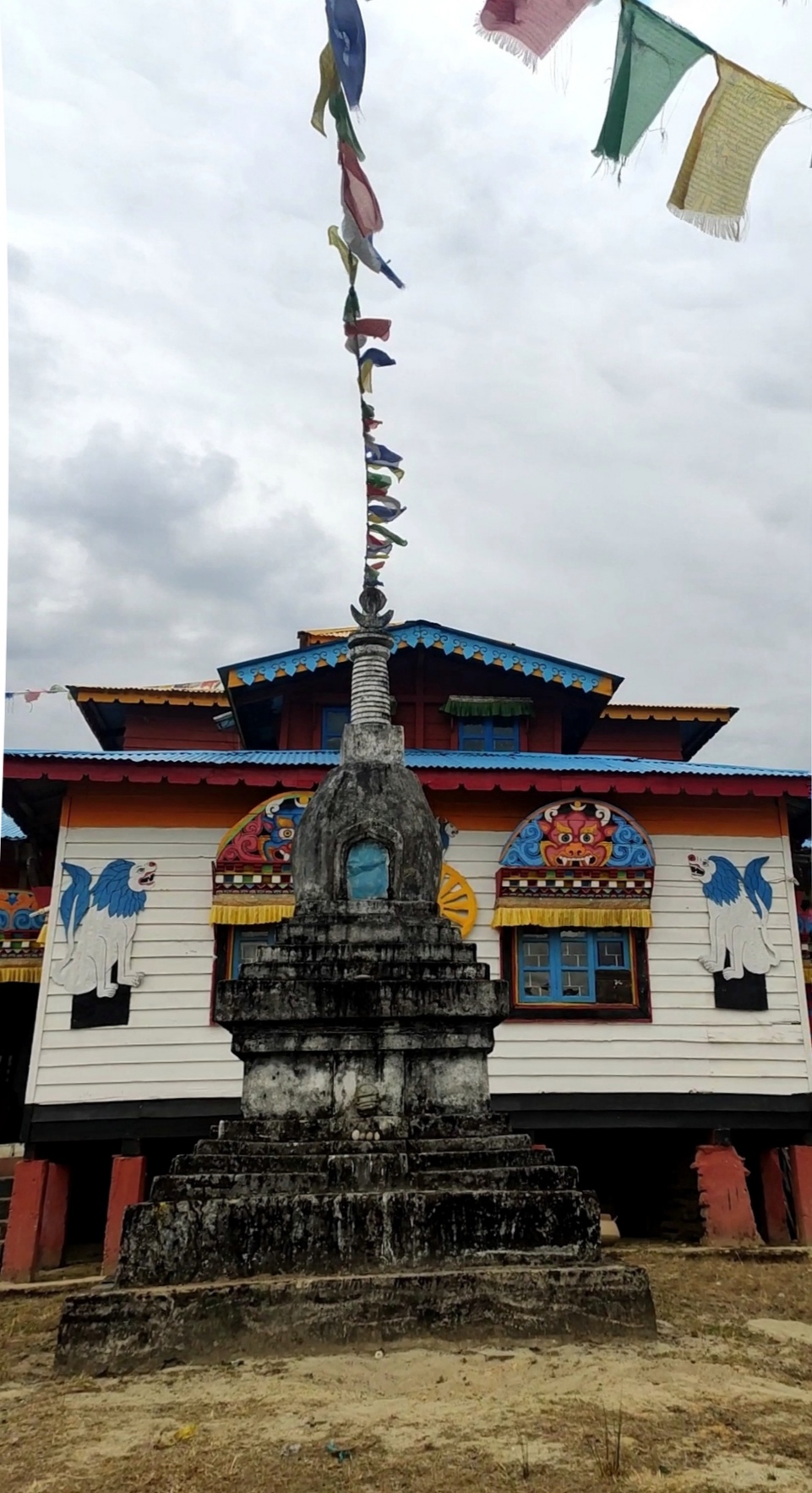 Anyone who travels to Mechuka will generally start from the 400 years old monastery. The Donyi- Polo Monastery resides in the hill just 14 kilometers away from the town. The Gompa with a splendid panoramic view tells us the history of the valley. In 2003 the Holiness Dalai Lama himself visited the Monastery. Earlier the only access to the Gompa was by trekking but nowadays you can travel by vehicles too.

Also known as the new Monastery is located just near the town. Although the Gompa doesn’t allow any outsiders, you can always spin the prayer wheel around the Gompa to make a wish. You can see the whole town from the new Monastery.

Not so far from the Yarlung camp you can see The Hanuman face sculpted high in the mountain. Just a glance at him and you can feel a chill down your spine. Civilians without a special permission are not allowed through the gate. Also, you will see tons of abandoned bunkers used by soldiers during the wars.

The story of Gurudwara in the valley of Buddhist will make you feel proud and blessed. The incident dates back to 1980’s when Sikh regiment was posted in the area. One night, the headmen of Mechuka village came to the Sikh Major, asking help and complaining about his boy having severe stomach ache. With no facilities available at that time, the Major decided to see the boy himself.

He went inside the headmen’s home and offered some medicine to the boy. It is when, the Lamas (teacher in Buddhism religion) instructed the boy not to take the medicine yet and instead they started sculpting an Idol from butter and rice. After some time the Major was shocked to hear the Lamas chant “Nanak” “Nanak”. The boy was allowed to take the medicine only after the prayer. Still shocked and curious the Major asked the Lamas about the mantra. To which, they told him about the story of when Guru Nanak once came to the place and meditated in the cave. Only after hearing the story, the regiment built a Gurudwara in the Buddhist hamlet.

The Sikh soldiers often come to the Gurudwara and for prayers. You can visit the place for some prayers and eat langhar afterwards.

Just opposite of Gurudwara there is a small waterfall where you can find a hole. They say that if you are lucky enough you can find a lucky gem inside the hole.

On the left, just before the town entrance, there lies a little yet lovely village. The scenic village is ideal for panoramic photography. Locals are the most down-to-earth people you’ll ever meet; sit and have a nice conversation with them.

With all the spots done, you can go for a short trek or two. Reach to the viewpoints, grab a cup of chai and a bowl of Maggie to enjoy the stunning view of Mechuka town beside the Yargepchu River.

Our four day plan was starting to end. So, beside all the mesmerizing explorations and sight seeings, our last plan for the night was to make our remaining time memorable. Our sweet host (resident of the nearest village Dorjeeling) made us some delicious non- veg traditional thali dinner. We sat around a bonfire on the rooftop later in the evening to warm up. Meanwhile, to lighten the mood, our host handed us some rice beer. We lost track of time between stargazing and him telling us stories and folklore about the place.

With so many magical and fairy-tale-like experiences, we were disheartened but had to return home on the seventh day.

Despite the fact that the journey was very brief. The things we learned and took with us will forever be a part of our unique memory. With so much more to tell, i only have limited words to express it. So here I am, resting my hand and entrusting the remaining of the journey to you. 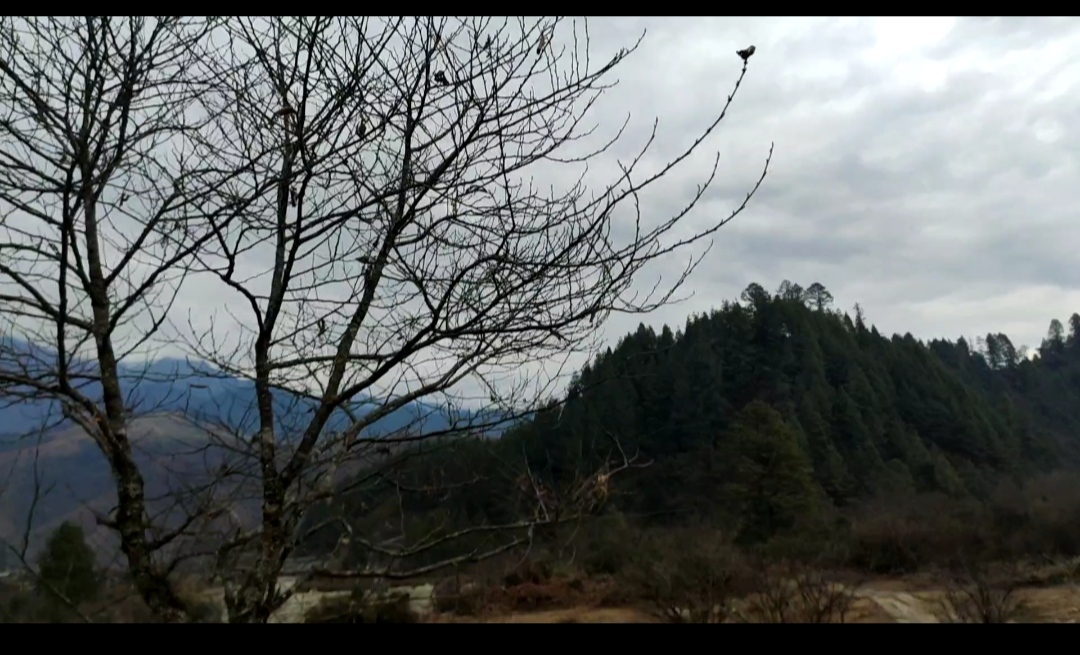 I have covered the part on How to reach Mechuka here.

My story isn’t just a travel blog; it’s a lifelong memory to be preserved. I’m not going to write my heart out and am merely skimming the surface of the trip because some things are best experienced rather than described. Finally, a word of advice: 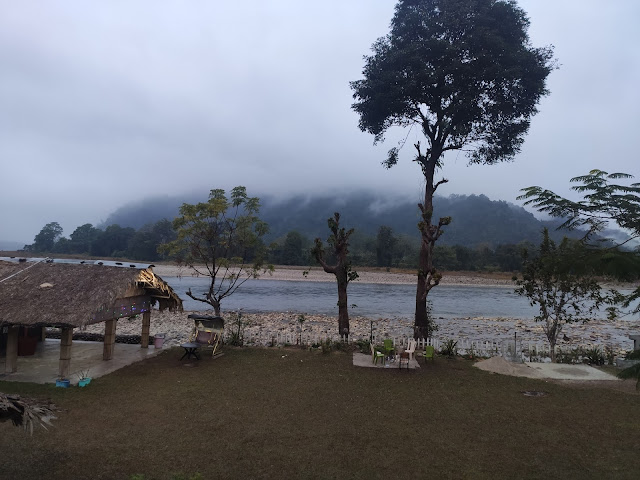